Bringing back the bush – tree by tree, bay by bay 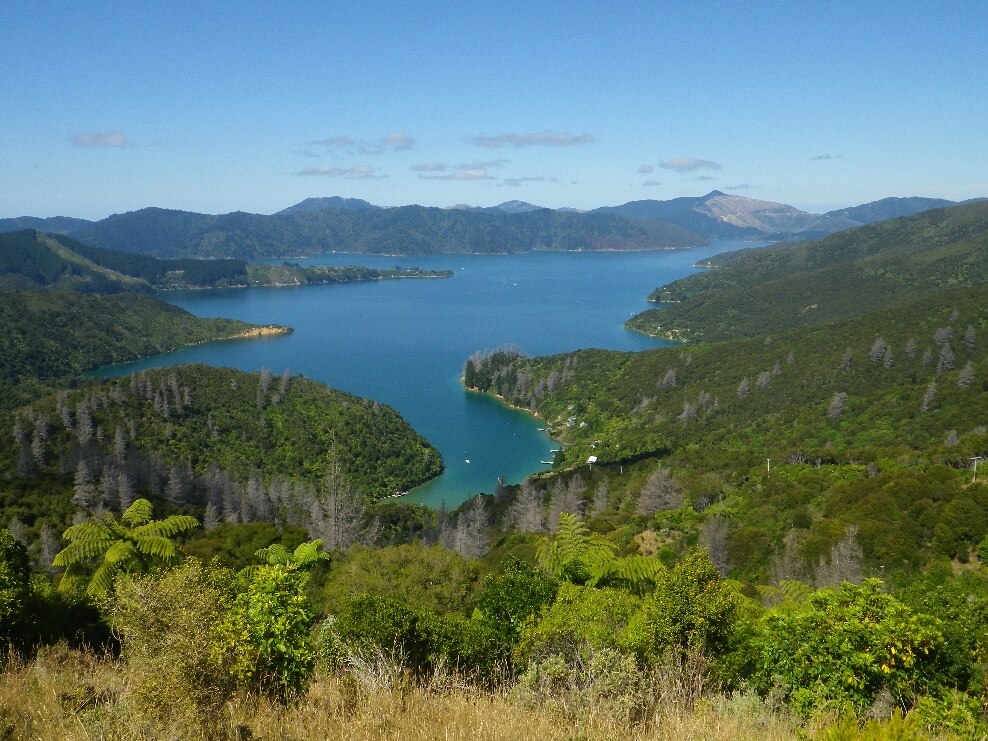 Bringing back the scenic skylines (Bay of Many Coves)

A wilding pine is a pine tree in the wrong place. They grow from seed that has blown from a forestry plantation or an old farm tree. If left unchecked, wildling pines take over from the native bush and ruin the scenic skylines of the Sounds. Without action, we will lose the bush and lose the birds and insects that rely on it.

Before and after treatment in Blackwood Bay, Queen Charlotte Sound.
The Marlborough Sounds Restoration Trust is a voluntary trust that has been working with landowners since 2008. Contractors are employed to track down, drill and poison each pine. The tree is left to die where it stands, allowing light and room for the native bush to grow and dominate again. Herbicide is used rather than chainsaws because a felled tree damages the native undergrowth and spreads its cones to seed again. 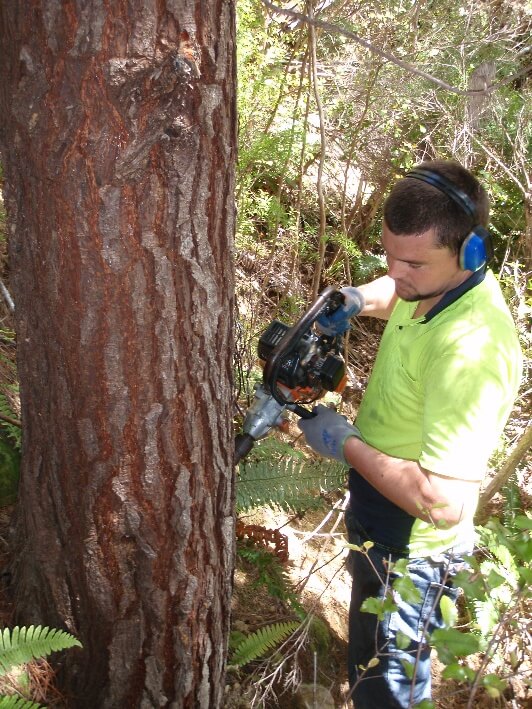 Contractor drilling a pine tree for poisoning.
To date, over $2 million has been raised to carry out this vital work. Support has come from national funding bodies such as the Lotteries Grants Board, Rata Foundation and the Department of Conservation as well as local organisations such as the Pelorus and Waikawa Boating Clubs and businesses including Interislander and Kathmandu. So far, about 40% of the land in the Sounds badly infested with wilding pines has been subject to control or control is imminent (see Map). This includes large tracts of Inner Queen Charlotte Sound, Outer Queen Charlotte Sound, D’Urville Island and Kenepuru Sound. The main areas that have yet to receive attention include Croisilles, Admiralty Bay, Pelorus Sound, Tory Channel, Port Underwood and the Outer Sounds. Each year the Trust needs to raise around $250,000 to continue the fight in new areas and to carry out follow up work in treated areas. Without this follow up work, regrowth can take hold again.

Map of carried out and planned treatment (per Nov 2017)
Over the past 10 years a huge amount has been achieved in restoring the natural landscape in the Sounds. However, a recent review of ecological impacts of the wilding pine control concluded that “It looks as though the Trust will need to carry on its magnificent work for at least another decade, if the task – diminishing the ecological threats posed by wilding pines in the Marlborough Sounds until they are minimal – can be realised. Maintaining momentum and working on all fronts as quickly as possible are most likely to ensure the project succeeds in the long term.” 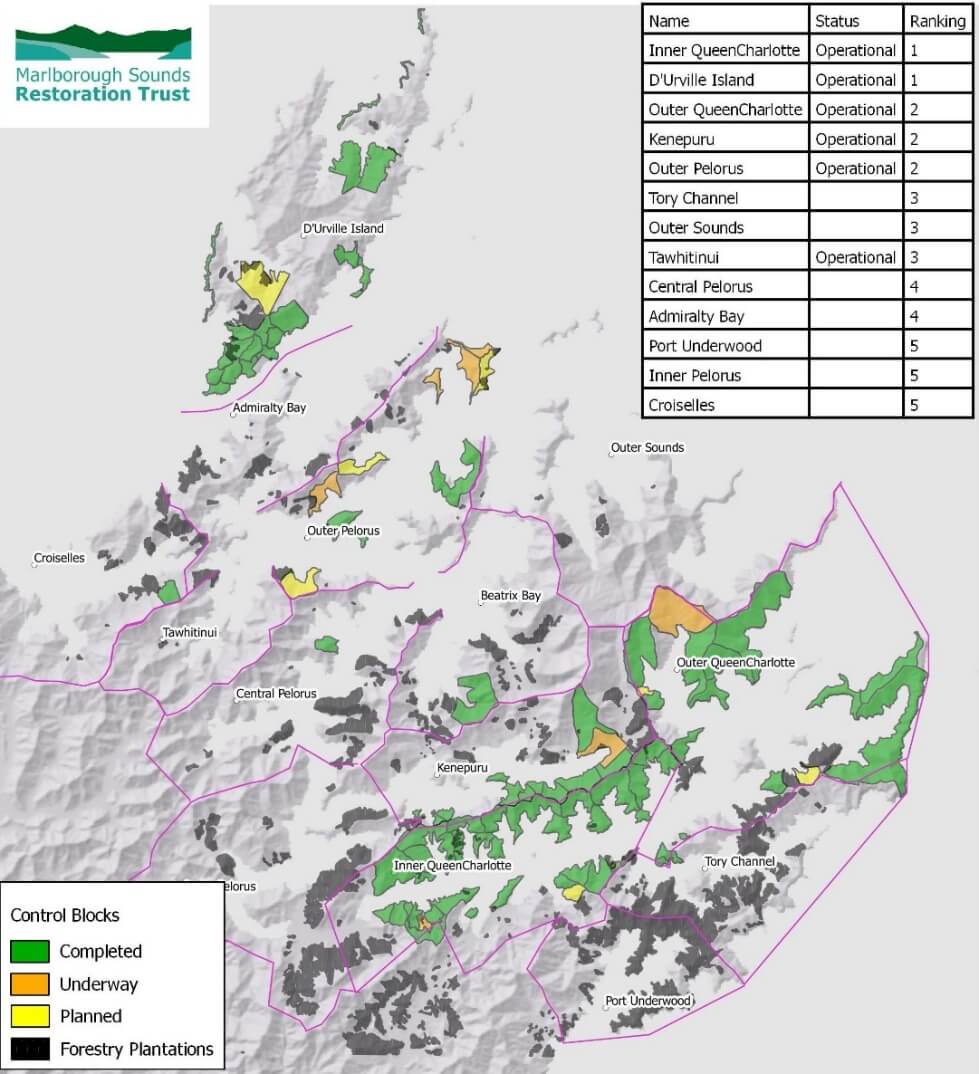 Map of carried out and planned treatment (per Nov 2017)

The Trust encourages and supports landowners to undertake their own small-scale wilding pine control, as a complement to its own programme. If you are a bach or land-owner in the Sounds, you can contact the Marlborough Sounds Restoration Trust by emailing (info@soundsrestoration.org.nz) or phoning the Trust Coordinator (021 2851858). We welcome donations from the public. On-line donations can be made through our Givealittle page (https://givealittle.co.nz/org/msrt) or you can contact us for a donation form. The Trust has formed valuable partnerships with a range of businesses in the Marlborough Sounds. If your business would like to become a partner of the Trust, please contact us.
For the first time, a strategic and planned approach to wilding pine control is being undertaken in the Sounds and on a scale far larger than any work done previously. It has become a huge community effort that will benefit both locals and visitors as they see the bush, wildlife and scenery of the Sounds restored. 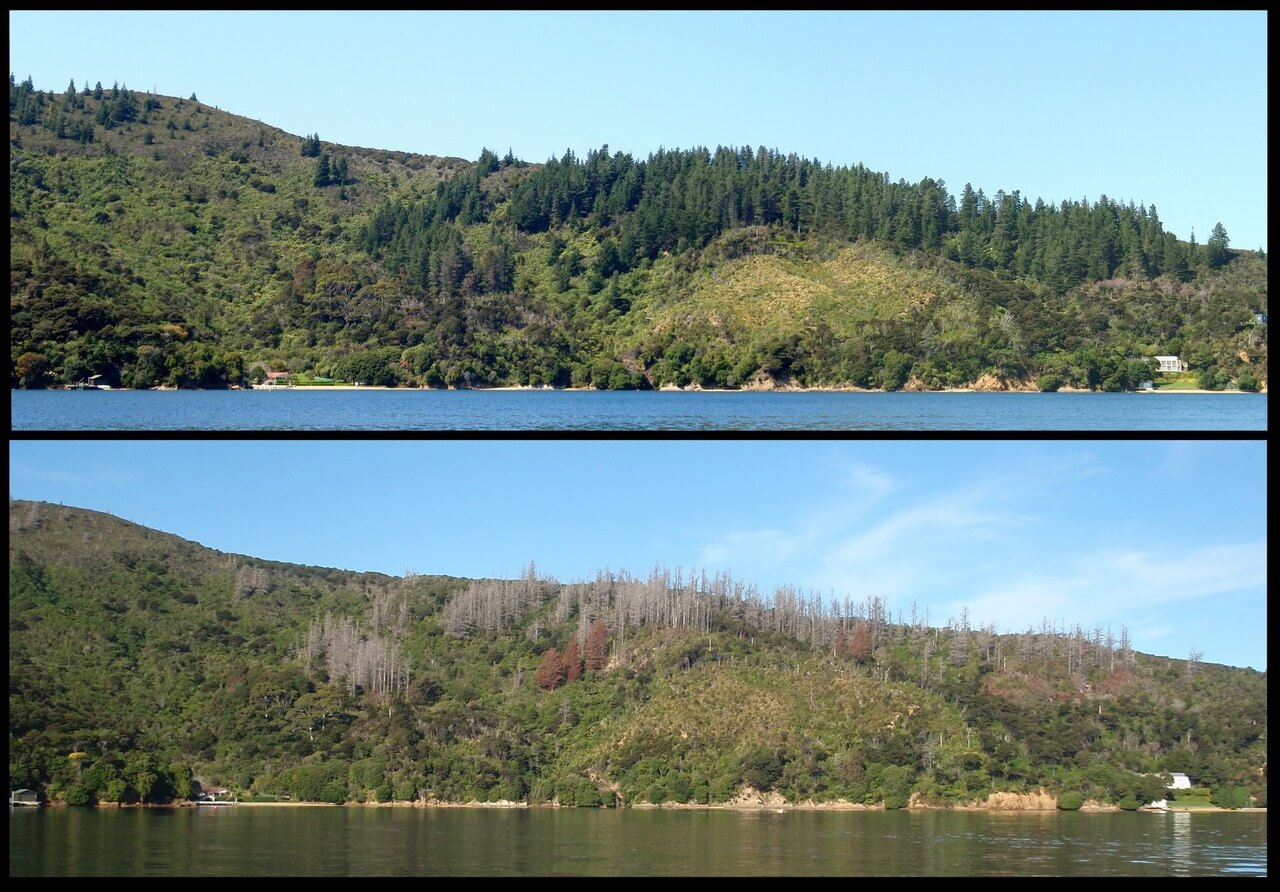 Before and after treatment in Blackwood Bay, Queen Charlotte Sound.