Boaties were treated to regular sightings of a killer whale/orca pod as they fed and rested in the Sounds earlier this year. The pod consisted of a male, several females and a newborn calf, which was possibly born in the Sounds. This was a pretty exciting sighting, given that orca are classified as nationally critical in New Zealand with less than 200 individuals. We have three distinct groupings—one around the North Island, one around the South Island, and a third that spends its time around both islands. 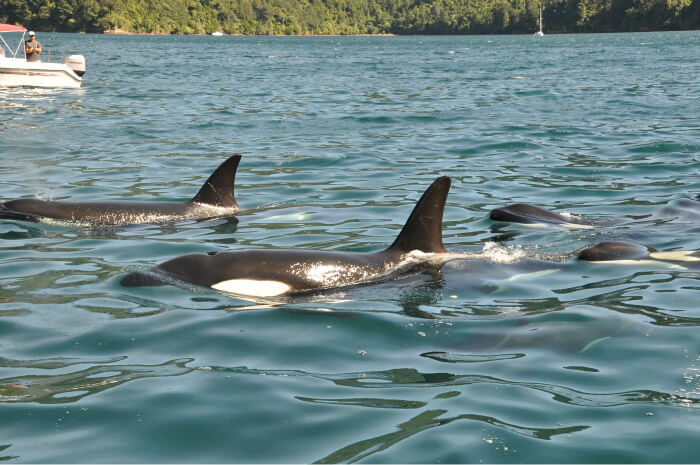 Despite its confusing name, the orca is biologically a dolphin, not a whale. It is the largest member of the dolphin family with males weighting reaching 5.5 tonnes. The male’s dorsal fin towered over the females, at an impressive 2m high.

As far as we know, wild orca have never killed a human, however as one of the top apex predators of the ocean, they are certainly capable of it. Orca have been recorded cooperatively hunting seals, other dolphins and even a blue whale, the largest of all whale species. Generally, they feed on fish, sharks, rays, squid, octopus and sea birds.

One of the greatest potential impacts on orca is likely to be disturbance caused by vessel traffic. The presence of boats is known to disrupt the normal behaviour of these animals, particularly resting, and underwater noise may disrupt echolocation signals and other communication.

Because they are so rare, orca have been included in the definition of whales in the Marine Mammals Protection Regulations. Therefore, you must follow the rules regarding whales when you come across orca. The main regulation that we find people inadvertently b3each is that your vessel should not be within 50m of a whale. This can be tricky when the orca comes to you! If you can’t move out of its path to maintain 50m, put your vessel in neutral and enjoy the show until the orca departs, as it can be more hazardous for the orca if you attempt to reverse away.

Other regulations when it comes to whales are: