Light winds from the nor’easterly quarter brought the fleet a chance to stretch their legs around Perano Shoal with a great display of spinnakers and gennakers on the run home in race 8 of the Marlborough Sounds Marinas Spring Twilight series. With the business end of the series drawing close some boats adopted a more strategic approach, matching up against their closest rivals to maintain or improve points differentials.

Pip Maslen took advantage of his early start time and the stronger early breeze to build a lead on the rest of the fleet to take Division 3 in Ricochet, the Davidson 28 finishing 3 minutes clear of Fade to Black, Bryce Ecklein’s Young 88 backing up from his race 7 win with a strong second placing ahead of Ian Michel’s Reacher in third.

Division 2 was closely fought, Rob and Many Carpenter coming right at the business end of the series taking their Farr 727 Freaky to a win by 25 seconds over Matt Michel’s Ross 830 Bump ‘n’ Grind with Ron Ives taking third with his Lidgard 35 MacIntosh. The same three boats were fastest around the course, Bump ‘n’ Grind home ahead of MacIntosh with Freaky third on line.

Bill Richards and Wilfried Holtrop consistently chose the correct side of the course to take the win, Flying Tiger keeping constant pressure on Matt Kerr’s Satellite Spy, the Ross 40 taking second ahead of the Farr 38 Flying Fox, Chris Williams sailing a great race for third. Satellite Spy took the line honours win ahead of Flying Tiger with David Croad’s Beneteau First 40.7 Norther Rebel II sneaking third on line in a blanket finish with Bluebird, Global, Flying Fox and Midnight all finishing within a 90 second window. Following prizegiving the club heard from solo round the world sailor Elana Connor who sailed as a guest on Satellite Spy before departing for Nelson on her figure 8 circumnavigation of New Zealand.

With seven races completed in the series Division 3 has tightened up, Reacher and Our Girl tied on 37 points each with Finnistere on 45 points. Ricochet and Third Wave are still in with the chance of a place once worst results are discarded while Fade to Black can play the spoiler with more good results that split the field. Clive Harragan’s Raven 26 Settimio is well positioned on 23 points at the head of Division 2 with nearest rival Sea Fox losing ground after race 8 to be on 34 points while Freaky and Phantasea are locked in a battle for third, both on 48 points, one clear of Bavaria on 49. Division 1 leader Midnight had her worst result of the series so far with a 7th to put her on 23 points however with closest rivals Bluebird (now second on 43 points) moving ahead of Raconteur on 46 points now third. Northern Rebel II on 52, Coup d’Etat and Global both on 55 are all in the hunt for a place on the podium. 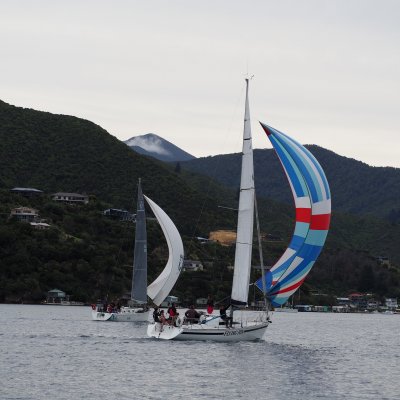 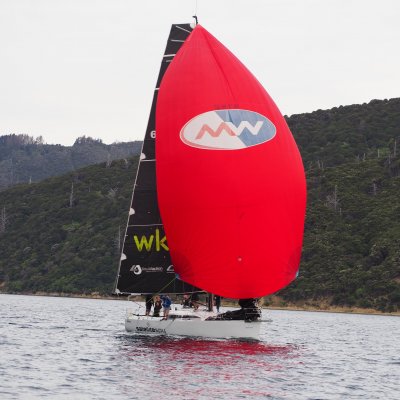