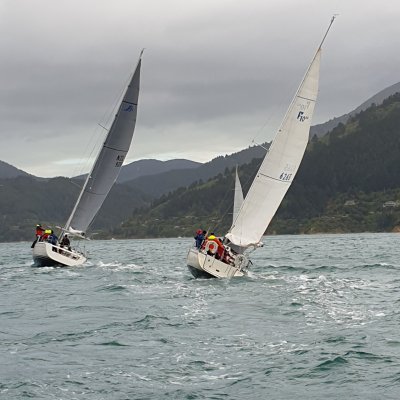 in the Marlborough Sounds Marinas Spring Twilight Series. The strong winds were enough to turn off a couple of boats from leaving the safety of the marina but still 17 made the start line.

On the course, the three divisions met a mix of 25kt gusts, 10kt breeze, and holes of nothingness. This resulted in several double tucks, some spectacular round-ups, and a couple of unintentional 360 degree turns.

In the end, there was another good crowd at the Waikawa Boating Club for dinner and prize giving. The winners were Bluebird in Division 1, Phantasea Division 2, and Haurere Division 3.

Tuesday nights at the club are $15 buffet dinners and $5 wine and tap beer. The Waikawa Boating Club is open to members, their guests, and any member of a Clubs of NZ affiliated club.

Results remain provisional until after the sailing committee meets.