After a day of high winds and heavy rain, the weather for Race 10, the moderate winds and blues skies over Waikawa Bay were just reward for the twenty boats and their crews who took to the water in the final of the Marlborough Sounds Marinas Spring Twilight Series.

With a mathematical chance of taking the Division 3 title, Greg Cornish gave Acamar every chance, the Easterly 30 taking the win ahead of John Oswald’s Lidgard Supertramp  with Alex Soper’s Hanse 345 Our Girl only fourteen seconds behind in third place. 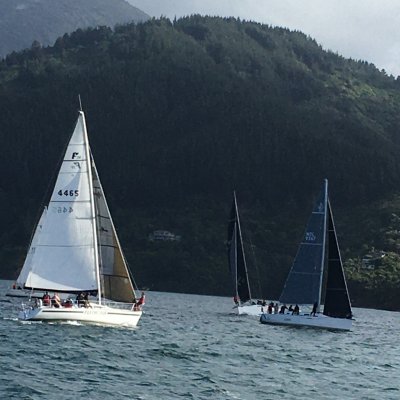 L to R Flying Fox, Satellite Spy and Global manoeuvre prior to the Division 1 start.

Proof that the little guys can mix it with the big boys in Division 1 as Clive Ballett’s Farr 1020 Coup D’Etat executed a strong start sequence, pushing Satellite Spy over the line early, requiring a restart from the flying Ross 40. Bob and Jennie Crum’s J120 Bluebird set the early pace despite some ‘interesting’ episodes with their big blue gennaker however Satelliet Spy displayed some excellent spinnaker work to take the lead by the end of the first lap. Line honours went to Satellite Spy ahead of Bluebird with series leader Global fighting hard to take third on line. Once handicaps were taken into consideration, Dave Kelway’s Beneteau Khamsin took the win ahead of Global with Bluebird seven seconds back in third place.

With racing done and dusted for the series it was time to find the winners. In Division 3 Ian Michel took his Wright 10 Playwright to the series win with a run of consistent results seeing him finish on 23 points, four clear of Acamar Chris Gorman’s Farr 1020 Free Rein dropping to third behind Acamar after holding second in the series with a race to go.

As expected, Settimio dominated Division 2, Clive Harragan’s Raven 26 finishing on 16 points, eleven points clear of Sequin, their final race win pushing them ahead of Raconteur and Freaky, both boats finishing on 30 points with Raconteur taking the podium position on countback.

Going in to the final race of Division 1, Khamsin had to produce a win and hope that Global had a bad race. While the first part of the equation was delivered, Global ensured the title was theirs with their second placing enabling them to drop a fifth placing and finish with a total of 15 points ahead of Khamsin on 19. Despite a broken halyard, aboard Flying Fox Chris Williams held on to third place in the series, bringing his Farr 38 home in fifth on the night to finish one point clear of Bluebird for the series.

Attention now shifts to a racing format new to the Waikawa fleet with circuit racing making its appearance for the first time. In this format boats sail a series of laps of a short course for a set duration. The average lap time for each boat is then calculated and their handicap applied to that average lap time. With boats and crew sharpening up for the Giesen New Year regatta the Boom Town Brewery Summer Fun circuit race series should produce some interesting results.