A steady breeze with the usual variations only the Sounds can deliver made for a lively start to the Marlborough Sounds Marinas Spring Twilight series at the Waikawa Boating Club. After a dearth of opportunities through lockdown and winter, crews took advantage of the mild conditions with forty boats taking to the water across three racing divisions. The race management team set a good course which challenged the skills of all taking part and provided a great return to twilight racing.

With 2019 winner Playwright no longer a part of the Waikawa fleet the title must go to someone else. Staking his claim early, John Oswald took the Division 3 win, his 8m Lidgard Supertramp coming home well clear of the rest of the fleet and giving a real thrill to a couple of tourists along for the ride with him. Returned to the fleet after a season off, Finnistere took second, Greg Frisken and Kate Trayl 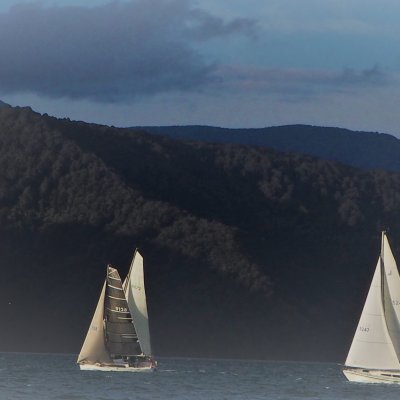 ing bringing the Mummery home just 2 second clear of Greg Cornish’s Easterly 30 Acamar in third. Cornish will no doubt be looking to improve on his second place in the 2019 series.

Division 2 saw the usual suspects to the fore, new dad Matt Michel showing that fatherhood and sleep deprivation are no barrier to sailing fast, taking line and handicap honours in the Ross 830 Bump ‘n’ Grind 8 seconds ahead of 2019 series winner Clive Harragan in his Raven 26 Settimio with Jason Munro only 3 seconds back in third, his Hanse 345 delivering a great start to the series. Ron Ives kept Michel honest in the line honours battle, his Lidgard 35 MacIntosh 26 seconds behind the Ross with Laurie McIntyre’s Young 780 D’Edge third on line. With the entire Division2 fleet finishing less than two minutes apart on handicap 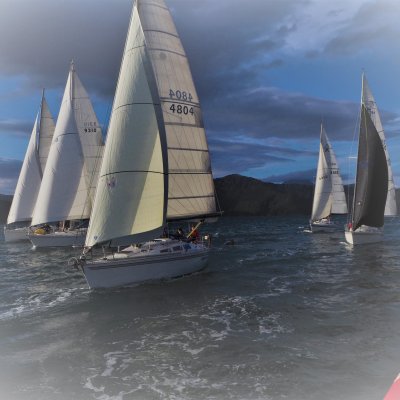 it’s obvious the handicappers have done a great job and have set the scene for a great battle throughout the series.

The largest group of the night hit the start line in Division 1 with fifteen boats taking up the challenge. Matt Kerr’s Ross 40 Satellite Spy continued an impressive run of line honours wins, beating David Croad’s Northern Rebel with Bob and Jennie Crum third on their J120 Bluebird. With handicaps applied Croad’s Beneteau First 40.7 took first ahead of Chris Webb on Midnight, the Davidson 45 having a very slow start but displaying good upwind speed to finish ahead of Bill Richards and Wilfried Holtrop on the FT10 Flying Tiger in third. In the wrangle between Farr 1020’s it’s 1 all after David Gillies brought Prime Suspect II home ahead of Coup d’Etat with Clive Ballett’s boat taking the handicap win by 11 seconds.

With a good first-up turnout and crews already displaying good levels of boat handling the scene is set for an exciting series. The larger boats now turn their attention to the first of the offshore series with the Brothers Islands race scheduled for Saturday.