Race 5 of the Marlborough Sounds Marinas Spring Twilight Series featured steady moderate winds, moving the focus more to the crew work end of the spectrum and away from the reliance on judgement calls which had been the hallmark of earlier races in the series. Spectator numbers were well up on normal Tuesday figures with nearly 5,000 aboard Ovation of the Seas being treated to a ringside seat view of the racing as the liner made its way out through the race fleet. 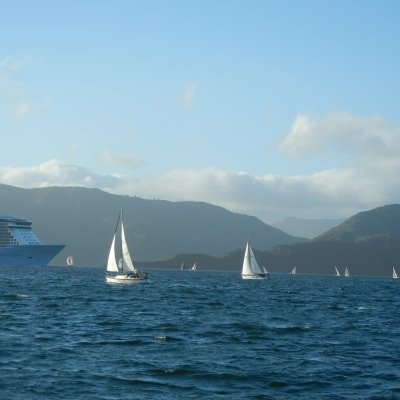 After being edged out of line honours in the WineWorks Marlborough Wine race Satellite Spy had a point to prove, the Matt Kerr skippered Ross 40 edging out Aaron Blackmore’s Young Rocket Oldsmobile by a tight 12 second margin with 15 seconds back to Bob and Jennie Crum’s J120 Bluebird in third. The performance from Oldsmobile was enough to give them the win on corrected time from Sam Edwards on MRX with Global, the Dabvid and Joanna Grigg owned Beneteau 36.7 3 seconds back from MRX in third. The result sees Oldsmobile move to the top of the Division 1 table, 1 point clear of previous leader Flying Fox, Chris and Sara Williams’ Farr 38 now ten points clear of Bluebird in third place on the table.